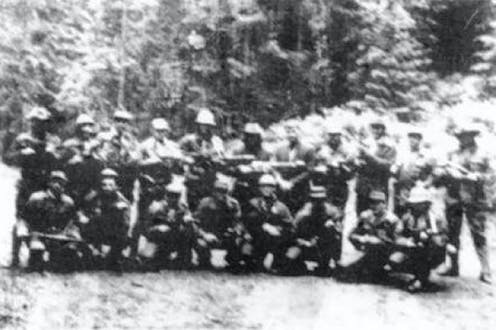 Fifty years ago this month, in June 1972, Yugoslavia’s Territorial Defence Force was desperately trying to contain and kill militants associated with the Australian-based Croatian Revolutionary Brotherhood[1].

For the second time in ten years, foreign-based nationalists were attempting to incite a revolt against the country’s Communist Party government, headed by president Josip Tito. Their aim was to create a Croatia independent of the rest of Yugoslavia.

Believing that now was the time for a revolutionary uprising of Croatians, and having learnt from the smaller, unsuccessful attack in 1963, the militants devised a daring plan to strike deep into the heart of Yugoslavia. The fallout of the operation, which was launched under the code name Operation Phoenix[2], would echo through the governments of both Yugoslavia and Australia.

Read more: Cinema opens a dialogue about coming to terms with Balkans' past[3]

Militants move in to Bosnia

Nineteen men, many of them Croatian Australians and some of them from West Germany, had been preparing for months. Inspired by Fidel Castro’s tactics during Cuba’s revolution and observing the recent suppression of the “Croatian Spring” movement, they believed they could rally the Croatians of Yugoslavia against Tito.

On the night of the June 20 1972, the militants managed to evade detection by the authorities and enter Yugoslavia from Austria. They hijacked a truck and drove to Bugojno, a central Bosnian town with a large ethnically Croatian population. There, they attempted to recruit locals to their cause.

Receiving little sympathy from the resident population – some of whom reported them to the authorities – the militants began to attack Yugoslavian outposts and distribute propaganda. Aware that they had no way to escape the country, their aim was to give maximum visibility to their cause.

Alarmed and embarrassed by these developments, Yugoslavia mobilised thousands of men and placed central Bosnia under quarantine. Tito was personally involved in the operation. After a brutal firefight on June 25 in which most of the attackers were killed, the surviving members of the incursion fled into the hills. Only after four more weeks were all 19 men accounted for. Fifteen militants and 13 Yugoslavians had been killed in this bloody event.

Mobilisation: a report to President Tito on the Yugoslav response to the incident. Petar Dragišić

The four captives faced trial in Yugoslavia. Three were executed and the final member, the youngest, was sentenced to life imprisonment. He would later be released, and ultimately died fighting during the breakup of Yugoslavia almost 20 years later.

For Australia, the incident was unique. An organisation founded and headquartered in this country had attacked Yugoslavia in a stunning way.

Now, new research, and the increasingly accessibility of primary source documents in the former Yugoslavia, has highlighted the considerable impact of the attack in both countries.

The militants didn’t spark an uprising of Croatians against Yugoslavia, and the Yugoslavian government was no doubt reassured by their failure to attract local support. But the psychological impact of an attack deep into the country was considerable. Tito was enraged. His security detail feared that diaspora Croatian nationalists had the will and sophistication to attempt to assassinate the president.

The prestige of Yugoslavia’s security services was eroded. To ensure an event like this was never repeated, Tito launched a “special war[5]” on émigré nationalists – a decade-long international campaign of targeted assassinations. Yugoslavia also increased pressure on countries like Australia to repress Croatian nationalist and extremist organisations in their territory.

In Australia, the attack wasn’t reported for weeks. When initial reports arrived from Yugoslavia, they were openly challenged by the Australian government, with Attorney-General Ivor Greenwood declaring[6] he was “not aware of any factual basis for such allegations”. Distrustful of its Yugoslavian counterpart, the Australian government needed to be convinced that the improbable events had actually occurred.

When the full scale of the incident became known in the lead-up to Australia’s 1972 election, the government was caught flat-footed and deeply embarrassed. Police findings that at least some members of the group had been recruited and trained in Australia were widely reported in the press.

Australian security forces, more interested in countering communism than investigating machinations within migrant communities, didn’t have files on many of the Australian-based members of the brotherhood. They were unable to give William McMahon’s Coalition government a clear picture of what had happened and how such a plot came to be organised by Australians.

Read more: Who were Australia's best prime ministers? We asked the experts[7]

The Commonwealth Police quickly launched a series of raids[8] and reported to the government that approximately 300 Croatian Australians were of “particular concern”. The issue of how best to respond to these developments bedevilled a government that was reluctant to alienate migrant communities but didn’t want to give the impression such plotting was acceptable.

The Labor Party, long concerned about the risk posed by violent Croatian nationalism in Australia, seized on the incursion as evidence the McMahon government was unable to grapple with locally based terrorism. They would move aggressively against Croatian nationalist organisations when they came to power later that year, though this led to damaging typecasting of ordinary Croatian Australians and sometimes serious impacts[9] on innocent individuals.

Coupled with the September 1972 bombings[11] of the Yugoslav General Trade and Tourist Agency in Sydney, the June attack in Yugoslavia weakened McMahon’s law and order record going into the 1972 election. Indeed, Labor MPs like Jim Cairns warned the government that any attempt to campaign on law and order had been undermined by their failure to tackle this issue.

While it is impossible to judge the role of a single issue in any campaign, and while neither party made the issue of Croatians central to their election pitch, the incursion had resonance.

Writing later, journalists Laurie Oakes and David Solomon observed[12] that the government’s inability to deal with Croatian nationalist violence meant “Labor could appear stronger on national security than the Coalition”. The narrowness of McMahon’s election loss made every weakness more important.

A forgotten episode of Australian national security history, the 1972 attack is more than just a footnote. The incident had real consequences for the political trajectories of both Australia and Yugoslavia.