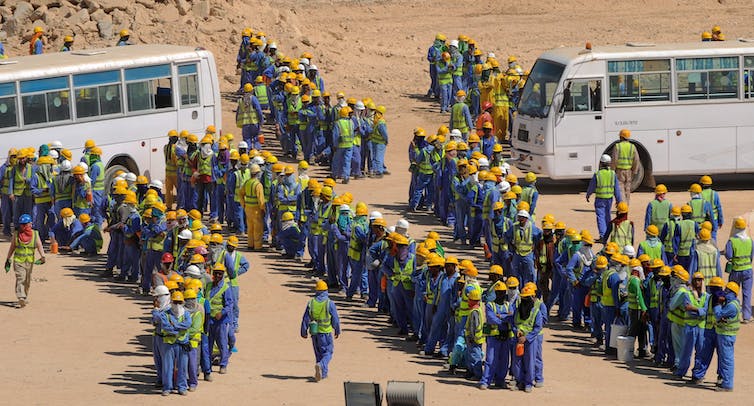 Organisers of Wimbledon, the main draw of which begins on June 27, have found themselves in a quandary over their controversial decision to ban Russian and Belarusian players in protest over the invasion of Ukraine.

Both the Association of Tennis Professionals (ATP) and Women’s Tennis Association (WTA) penalised Wimbledon for this ban by stripping the tournament of its ranking points[1].

Because one of the world’s most prestigious tennis tournaments has been relegated to merely a high-profile exhibition event, a growing number of players have pulled out of the tournament[2], including Naomi Osaka and Eugenie Bouchard (this shows how a boycotter event can simultaneously be boycotted by participants).

These kinds of boycotts occur regularly in high-profile sport as event organisers and participants use its global reach to highlight human rights violations.

But boycott actions and counter-actions – including those at Wimbledon – often do more to harm individual athletes who happen to be nationals of these countries rather than to the condemned regime or the event sponsors.

Australian former golfer Greg Norman sparked world-wide condemnation with his statement[4] that “we’ve all made mistakes” when discussing the Saudi-Arabian-backed killing of journalist Jamal Khashoggi.

It didn’t go unnoticed that Norman is also CEO of the Saudi-backed LIV Golf Investments, which launched a PGA-breakaway golf tour for the super-rich.

Norman’s dismissal of a murder and the horrified global reaction to his comment show the power of sport to highlight and simultaneously ignore human rights violations.

Former Australian golfer, Greg Norman, was widely condemned for his comments on the murder of Jamal Khashoggi. Neil Hall/EPA/AAP[5]

Nations accused of violating these rights have found strategic, proactive approaches to counter the punitive, reactive, and short-term approach of economic boycotts. And sport plays an important part in that, such as the example of Qatar using the FIFA World Cup as a confirmation of their credibility and ability to host a globally significant event.

Such investments in “sportswashing” – using sport as a thin veneer to present a sanitised, friendlier version of a political regime or an organisation – are big business. The global influence of sport can become a vehicle for soft diplomacy and pursuing legitimacy.

November’s FIFA World Cup in Qatar remains a topic of a decade-long debate questioning how FIFA could award the world’s biggest sporting event to a country with a dubious human rights record[6].

This has now only worsened with evidence of mass exploitation[7] of the migrant workers constructing the Cup’s stadiums.

Although arguably less extreme in nature, Australia is not absolved of human rights deficiencies in sport.

Why, for example, do Indigenous Australians remain under-represented[9] at the elite and community level in most Aussie sports? Why are Australian women missing as leaders in coaching? Why is there currently only one openly gay male professional soccer player[10] in Australia and no openly gay male AFL players[11]? Why have so many members of Australia’s gymnastics and swim teams reported abuse and toxic cultures[12] that started when they were children?

We should take to heart that even the practice of sport is a universal human right under the Olympic and European Sports Charters[13], and other internationally ratified declarations and treaties.

However, most nations do not fully recognise and implement this notion in policy and practice, with access to sport participation often marred with complexities and hypocrisy.

Read more: The Olympics have always been a platform for protest. Banning hand gestures and kneeling ignores their history[14]

Wimbledon organisers are clearly trying to make a point: invading the sovereign territory of another nation is unacceptable.

Yet even though the tournament can call the world’s attention to its stand, has banning players from invading nations proven to be an effective means to defend and protect human rights?

The answer would be a resounding “no”.

What the ban has achieved is to signal that the Wimbledon organisers take a position against the Russian invasion of Ukraine. But taking a stand does not defend nor protect.

In this case, it hurts those who cannot be blamed for the war (the banned tennis players), and the unintended consequences (no ranking points) hurt the wider community of professional tennis players.

While sport can indeed be a valuable platform to promote human rights, we must also recognise it doesn’t take much for sport to become exclusive, divisive and controversial.

Crucially, leveraging sport to advance human rights requires that human rights safeguarding by Australia, Russia or Qatar is measured by the same yardstick, recognising that much work must be done to ensure each country’s own sporting environment is inclusive and free of discrimination.

In doing that, we can truly recognise sport as the universal human right that it is, and it can remain true to its core objective of celebrating human potential and achievement.