In its latest move to spur business investment, the government will extend its $150,000 instant assets write-off until the end of the year.

The six-months extension, which will be legislated, will cost $300 million in revenue over the forward estimates.

As part of the government’s pandemic emergency measures, in March it announced that until June 30 the write-off threshold would be $150,000 and the size of businesses eligible would be those with turnovers of under $500 million.

The government is battling a major investment slump. Bureau of Statistics capital expenditure figures show non-mining investment fell 23% in the March quarter and 9% over the year to March.

Apart from giving businesses generally more time to claim the write-off, the government says the extension will help those which have been hit by supply chain delays caused by the pandemic.

The write-off helps businesses’ cash flow by bringing forward tax deductions. The $150,000 applies to individual assets – new or secondhand - therefore a single enterprise can write off a number of assets under the concession.

With rain breaking the drought in many areas, farm businesses are getting back into production, so the government will hope the extension will encourage spending on agricultural equipment.

About 3.5 million businesses are eligible under the scheme.

Read more: Morrison's coronavirus package is a good start, but he'll probably have to spend more[2]

The instant asset write-off has been extended a number of times over the years, and its (much more modest) thresholds altered.

On the government’s revised timetable, from January 1 the write-off is due to be scaled down dramatically, reducing to a threshold of $1000 and with eligibility being confined to small businesses – those with an annual turnover of below $10 million.

But there will be pressure to continue with more generous arrangements, to head off the danger of a fresh collapse in investment.

In a statement, treasurer Josh Frydenberg and small business minister Michaelia Cash said the government’s actions “are designed to support business sticking with investment they had planned, and encourage them to bring investment forward to support economic growth over the near term”. 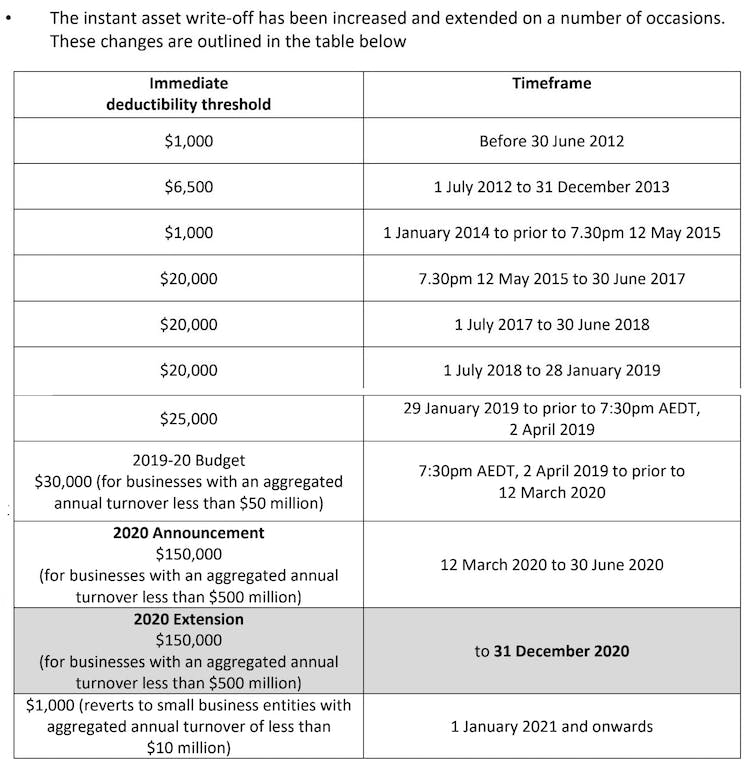