If you are neutral in situations of injustice, you have chosen the side of the oppressor. If an elephant has its foot on the tail of a mouse and you say that you are neutral, the mouse will not appreciate your neutrality.

This quote, or part of it, has been circulating on social media this week.

It is attributed to South African Anglican bishop Desmond Tutu in the 1984 book Unexpected News: Reading the Bible with Third World Eyes[1]. So it dates from Tutu’s time as a leading opponent of the apartheid system in South Africa, in which only white people were afforded the full rights of citizens.

But in recent days Tutu’s quote has encapsulated many people’s feelings about what’s going on in the United States today.

The killing by Minnesota police of George Floyd, arrested on suspicion of passing a counterfeit $20 bill, has become the latest ignition point for grievances about the systemic overpolicing and extrajudicial killing of African Americans.

Read more: The fury in US cities is rooted in a long history of racist policing, violence and inequality[2]

But the protests involving millions of people across the US and outside of it are fuelled by more than that. These protests are also about the systemic inequities that have recently seen America’s poorest communities take the brunt of both health and economic impacts of the COVID-19 pandemic.

So given the Black Lives Matter protests are in part about the failings of American capitalism, how the corporate world is responding is worth talking about. 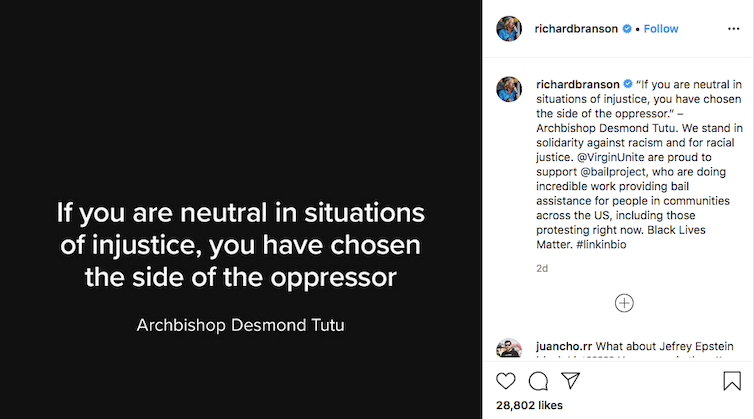 Richard Branson/Twitter[3] Brands supporting Black Lives Matter A bevy of the world’s best-known brands have used their marketing channels to offer support. “To be silent is to be complicit. Black lives matter,” said Netflix on Twitter[4]. “We have a platform, and we have a duty to our Black members, employees, creators and talent to speak up.” Similar tweets have come from Disney-owned Fox[5] and Hulu[6]. Apple Music joined the “Black Out Tuesday[7]” campaign to raise awareness about issues of systemic ethnic inequity. Nike has repurposed its famous slogan with its “For once, Don’t Do It” advert: Nike’s ‘For once, Don’t Do It’ advert.Corporations taking a stand on social issues is a relatively new phenomenon. As Australian academic-turned-popular TV presenter[8] Waleed Aly noted on his program The Project[9]: Normally when there’s something this divisive and controversial, you know, if you are running a big company, you stay out of it. You don’t want to be involved. What I’m interested in here is, is this just an evolution in marketing and the way that companies do this, or does it signal – is it a kind of leadership? Even if these companies are just protecting their commercial base (as his co-host Steve Price suggested), Aly said: “That’s still significant.” As a researcher in the field of corporate social responsibility, I agree. It’s easy to dismiss these statements as low-cost tokenism or politically correct wokism. It may be there’s a hard-headed business decision behind each message, weighing the costs and benefits to the bottom line. Read more: Where 'woke' came from and why marketers should think twice before jumping on the social activism bandwagon[10] But my research (and that of others) suggests there’s a growing need for what business academics call “political corporate social responsibility” (or PCSR). The challenge for those embracing it is both talk the talk and walk the walk. Political corporate social responsibility The concept of PCSR arises out of a wider paradigm shift in thinking about the responsibilities private businesses owe society. A traditional view – famously advocated by Nobel prize winning US economist Milton Friedman[11] – is that a business, so long as it obeys the law, is only obliged to maximise profits for it shareholders. Nothing else. Since the 1950s, however, a growing movement (both within business and without) has championed the cause of corporate social responsibility (CSR), arguing that it’s good business to do more than what is legally required to improve social and environmental impacts. Read more: Small businesses get long-term financial boost from social responsibility: study[12] Political CSR (PCSR) goes one step further than the narrower focus of CSR on how companies engage with suppliers, customers and local communities. Just last year 181 US corporations – including Apple, Deloitte, Fox, and Walmart - signed the US Business Roundtable’s revised purpose of a corporation[13], which aims to promote “an economy that serves all Americans”. Research published last month shows almost a third of consumers say they buy brands[14] whose political and social values align with their own, and about a quarter of consumers boycott brands that don’t. Nike’s path to politics Nike has been a forerunner in using its marketing to push social campaigns. The shoe maker has come a long way since the late 1980s, when it was the iconic corporate exploiter of both third-world labour, including children, and poor communities in rich countries. All the while spending millions on athlete endorsements to market its expensive sneakers. Since then, however, Nike has sought to reinvent itself as an socially responsible organisation that champions “equal playing fields for all[15]”. It dived into PCSR into 2018 when it chose controversial American footballer Colin Kaepernick for the face of its 30th anniversary “Just Do It” campaign. 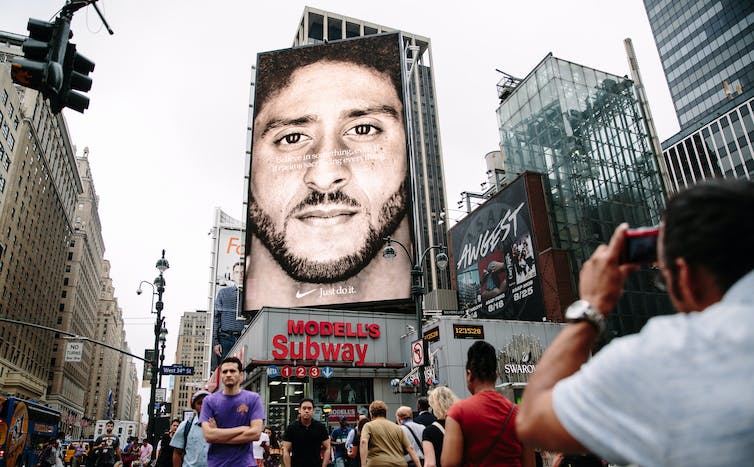 A Nike billboard featuring Colin Kaepernick near Union Square in San Francisco. D. Ross Cameron/EPA Kaepernick began the practice of NFL players kneeling during the national anthem before games in solidarity with Black Lives Matter. US president Donald Trump called the kneelers “disgraceful[16]”. Read more: Why US sports stars are taking a knee against Trump[17] So Nike’s decision was not risk-free. On Kaepernick’s advice it also withdrew a sneaker featuring an early American flag[18]. Internally Nike has worked to improve equality[19], with pay equity maintained for women and members of minority groups. It funds grassroots initiatives such as PeacePlayers[20], whose mission is to unite communities through sport. Walking the walk The uptake of PCSR by so many other companies in support of Black Lives Matter is significant. But it is only the start of an evolution that corporate America must make to shake accusations of tokenism. Read more: Woke washing: what happens when marketing communications don't match corporate practice[21] As Waleed Aly noted on the same episode of The Project, the focus on outbreaks of looting and violence at the expense of the much greater prevalence of peaceful protest, has helped obscure the main issue: there’s things state governments could be doing right now that they’re not. This is the point of PCSR – to address the “regulatory gaps[22]” in social and environmental standards and norms. Among the gaps in the US system contributing to overpolicing of black communities is the failure to provide equal access to public goods like education, health care and even clean air[23]. 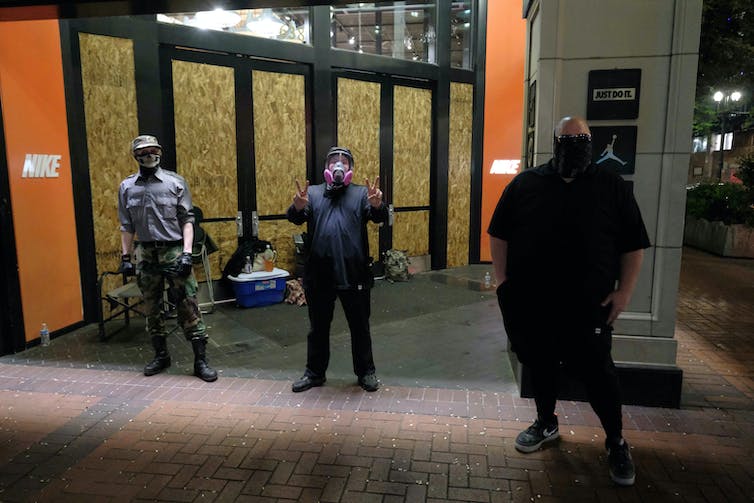 Guards outside a Nike store in Portland, Oregon, on June 2 2020. Alex Milan Tracy/Sipa USA Those talking the talk of PCSR will need to walk the walk and get serious about addressing why America’s particular take on free enterprise has failed to deliver on its promise of life, liberty and the pursuit of happiness by all. Desmond Tutu’s quote rings out across the decades as a universal truth. But a well-known aphorism also bears repeating. Actions speak louder than words. 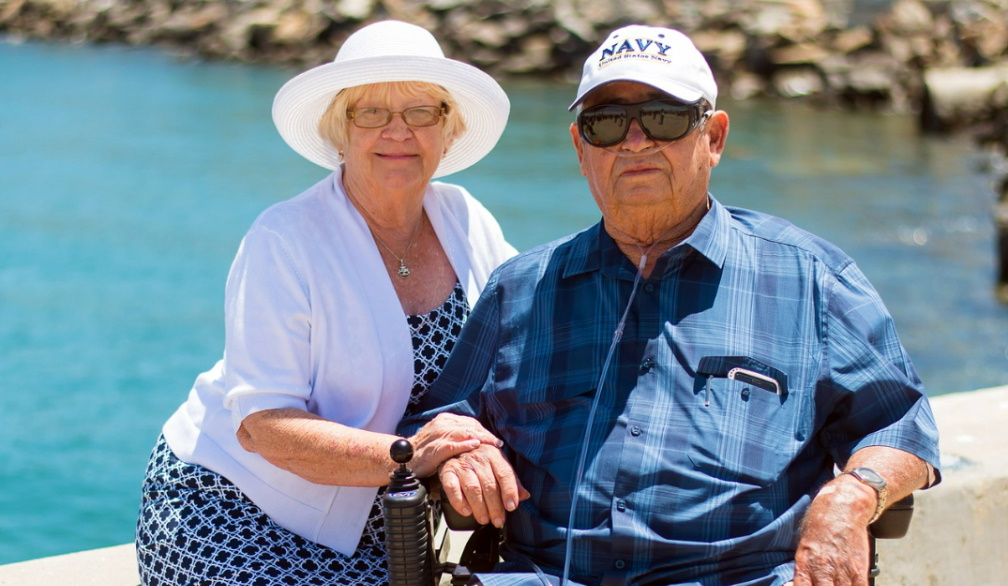