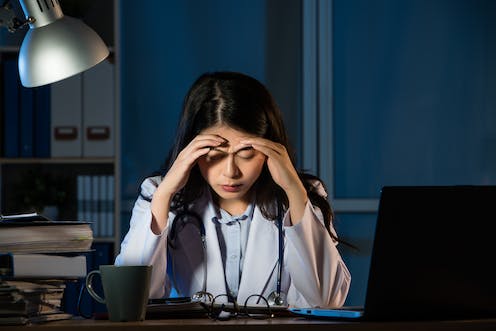 Nurses are a target for bullies more often than any other healthcare workers, and the bullying can take many forms.

My research[1] shows that nurses are particularly vulnerable to cyberbullying by patients and their relatives, which can cross the boundary between the workplace and home. This highlights the need for employers to take cyberbullying seriously and to take active steps to protect employees from it.

Read more: Like a 'cancer' of the workplace, bullying is a symptom of dysfunction[2]

Cyberbullying can be especially damaging

Cyberbullying is a growing problem both in New Zealand[3] and internationally[4]. It can take place in any workplace, but researchers have identified clear hotspots such as hospitals, schools[5] and customer services[6].

It can be described as unwanted or aggressive behaviour(s), perpetrated through electronic media, that may harm, threaten or demoralise the recipient(s), and can occur beyond work time. Because workplace cyberbullying crosses the barrier between work and home, it can leave people feeling trapped and unable to cope.

My research[10] shows many nurses who experience cyberbullying are also confronted with other “face-to-face” forms of workplace bullying such as verbal abuse, aggressive and undermining behaviours, and even exclusion or isolation. Additionally, certain forms[11] of cyberbullying can be more damaging than most traditional forms of bullying.

It is easy to imagine the threat people feel when they receive anonymous and unwanted texts, or the ongoing humiliation resulting from being abused on social media. In my study[12], nurses described the distress of not only having false allegations made about them on a public platform, but also of the potential repercussions on their reputation and career. One case of anonymous cyberbullying proved particularly difficult as there was little the organisation could do to intervene, with the abuse spanning several years.

Public forms of cyberbullying are also likely to have a much broader scope of harm – not only for the targets but also for the organisations involved. Customer or patient complaints on public forums may harm the target’s career as well as affecting the organisation’s reputation.

Likewise, the constant access provided by electronic devices is also likely to make targets of cyberbullying feel trapped. They have little chance of escaping the bullying[13] at home or replenishing their coping resources[14].

Cyberbullying easily circumvents common safety measures used to protect nurses, such as security offers or trespass notices. It introduces a new vulnerability[15] for nurses and employees in public roles.

Nurses have a responsibility to care for patients, which can make if difficult for them to block communication with relatives, even when they are being bullied, directly or via electronic channels. In one example, a patient’s mother would call to ask for help for her son, but then start abusing the nurse, who could not block the calls in case it was a genuine emergency.

How to approach prevention

Over time, cyberbullying can have a severe impact on the health of victims. They can reach a point where they feel forced to leave[16] their place of work.

Organisations have an ethical and legal responsibility to ensure the health and safety of employees. There are also substantial financial costs associated with not preventing workplace cyberbullying. Australia’s Productivity Commission[17] estimated the cost at A$6 billion to A$36 billion per year.

Many organisations aren’t well equipped to deal with workplace cyberbullying. Few have a relevant policy in place. This can often unintentionally signal to employees that cyberbullying is an issue they have to deal with on their own.

Any policies should include cyberbullying from sources outside the organisation, including customers, clients, students and patients. Finally, organisations must be prepared to take all reports and complaints of cyberbullying seriously, and support employees through this process.

At a much broader level, industry and professional bodies can address workplace cyberbullying in their current policies, codes of conduct and training resources. An industry-based approach to prevention and intervention is much more likely to be effective in addressing profession-specific risk factors such as those faced by health care workers.

At a national level, it is crucial that workplace cyberbullying – and traditional bullying, for that matter – are recognised in law as risks to employee health and safety.