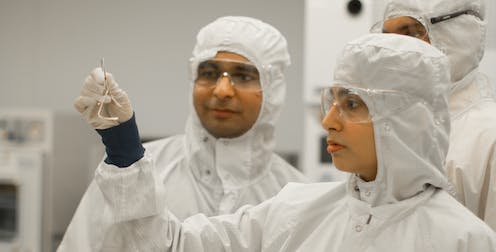 It took a chance meeting between Cameron van den Dungen, founder of a start-up mattress company, and Madhu Bhaskaran, an engineering professor at RMIT University, to see an opportunity to collaborate and commercialise research.

Van den Dungen had a dream of creating a bed for use in aged care to monitor sleep quality and comfort. Bhaskaran’s research team at RMIT were developing flexible wafer-like electronic sensors. The fruits of their collaboration is a smart mattress monitoring system known as “REMi”.

Our aim is not just to make incremental progress; we want to fundamentally shift the dial, so that in five or ten years’ time, we start to look more like Israel or California or the UK in terms of how our universities interact with business […]

Tudge is not the first minister with such ambitions. The benefits of commercialising university research have been talked about for decades. Yet Australia remains one of the worst-performing developed economies on this score.

According to the Australian Bureau of Statistics’s most recent data[3], just 5% of Australian businesses have collaborated with university researchers; and the smaller a company the less likely collaboration is.

Which is a problem given that small to medium enterprises – those employing fewer than 200 people – make up more than 99% of all Australian businesses.

So what to do? That’s a subject we’ve sought to answer through surveying 800 small to medium enterprises for the CSIRO[4].

Half of the SMEs we surveyed had engaged with universities or research institutes before. Half had not. These responses pointed to both the barriers and bridges to greater data commercialisation.

Among businesses that had not reached out to collaborate before, stereotypes about university academics were strong. They commonly thought universities would not understand their business, have different R&D aims or be too slow to progress projects.

The first challenge was just getting a conversation started – like that between van den Dungen and Bhaskaran.

Read more: How to get the most out of research when universities and industry team up[5]

Why a bed company needed a university

Van den Dungen grew up in the bed business. His father Henk had started working in the bedding department at Myer in the 1960s, then in the 1980s became a founding member of the Forty Winks retailer cooperative.

After years working in the family business, van den Dungen founded his own company, Sleeptite[6], and began looking for ways to make a better bed for use in aged care facilities.

He wanted a mattress with embedded electronic sensors to monitor a patient. This could replace the more haphazard use of pressure mats next to beds know if a patient had fallen out, and “door checks” by staff members doing the rounds at night.

Then came his chance meeting with Bhaskaran. Four years and several government grants later, their home-grown technology to provide real-time monitoring is ready for to be manufactured (by Melbourne mattress maker Sleepeezee Bedding). 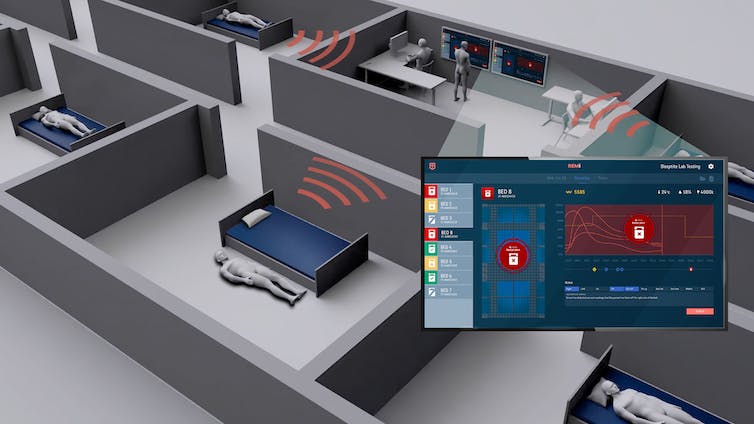 The REMi bed technology developed through the collaboration between Australian company Sleeptite and RMIT University enables real-time monitoring of all residents in a facility. Sleeptite/RMIT, Author provided

Businesses said they welcomed the opportunity to commence these conversations, and to establish relationships with researchers through small, entry-level projects such as those funded through Innovation Connections[7], a federal government program that provides facilitated introductions to researchers and financial support through dollar-matched grants.

Once a relationship was established, like that between Sleeptite and RMIT, further collaboration often occurs without further government funding.

On average, we found collaborating firms had undertaken seven projects with the research sector.

Read more: Our unis are far behind the world's best at commercialising research. Here are 3 ways to catch up[8]

Our findings show that young and micro businesses are especially open to collaborations, yet more targeted funding schemes are required to help them build their new technologies and capabilities.

To improve Australia’s success in commercialising research, funding needs to take a coordinated “pipeline” view – seeing each new project as the start of an ongoing relationship.

Funding needs to be available for training, activities to mitigate mistrust, and for seed and scaling-up collaborations. Universities need to rethink their incentive systems and businesses need to be willing to take strategic risks by venturing into unknown territory.

But most fundamentally a more connected incentive system is needed to enable both businesses and researchers to view collaborations as long-term investments, justifying the upfront money and time associated with initiating those relationships.