Few people expected the Reserve Bank to adjust its cash rate at its first meeting of the year today, and for good reason.

It has been saying loudly that it is “not expecting to increase the cash rate for at least three years[1]”. Today it said the commitment extends to 2024[2].

But it isn’t a commitment not to cut the cash rate.

The cash rate is that rate that banks pay to borrow money from each other[3].

It has always been positive, at times very positive.

But there’s no reason why it couldn’t be negative. Borrowing (accepting deposits) entails costs[5]. If the banks offered funds are offered more than they need, they’ll charge for accepting them.

Some rates are already negative

It’s already happened in the bond market. In several bond auctions, lenders to Australian government have agreed to pay for having the government accept their money[6].

Overseas, bond rates[7] in Germany, Switzerland, Netherlands, Slovakia, Denmark, Austria, Finland, Belgium, France, Ireland, Slovenia and Lithuania are negative. In Germany it means that someone lending the German government 105 euros agrees to get back only 100 euros when the loan expires ten years later.

Read more: Negative rates explained: how money for (less than) nothing is helping out the budget[9]

In two other countries, the Bank of England[10] and the Reserve Bank of New Zealand[11] are talking with banks about how to make negative cash rates work.

Calculations I carried out with colleague Timothy Anderson[12] suggest that if Australia’s Reserve Bank acted in accordance with its previous behaviour, it would have turned Australia’s cash rate briefly negative in the second half of last year.

Our model, that accurately describes previous Reserve Bank behaviour, is that the bank has a view about the “neutral” cash rate, one that will leave the economy neither “too hot” (too much inflation) nor “too cold” (too much unemployment). If inflation remains too low (and/or unemployment too high) at the neutral rate it moves the cash rate below neutral until inflation climbs back up.

In August 2020 when the Bank was forecasting a dire outlook[13] with unemployment peaking at 10% and inflation well below target our model suggests that if the bank was following previous practice it would have cut the cash rate to around -0.25%.

Read more: Sure, interest rates are negative, but so are some prices, and when you look around, they're everywhere[14]

By November 2020 when the bank’s forecasts were more positive, our model suggests a positive, but still extraordinarily low cash rate, of about the 0.10% it adopted.[15][16]

Australia’s Reserve Bank has been remarkably reluctant to take rates negative, seeing a cut into negative territory as fundamentally different to a cut that leaves rates positive. 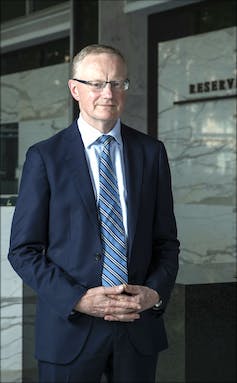 But he has conceded he would have to consider them if the world’s other important central banks went negative[18], a contingency several of them are preparing for.

Economic studies suggest that the neutral rate has been heading downwards for decades[19] and possibly centuries[20]. If the trend continues, negative rates will eventually become widespread.

To not match negative rates elsewhere would be to invite an influx of “hot money” chasing higher rates in Australia than were available elsewhere, pushing the Australian dollar uncomfortably high.

For now, the Reserve Bank has adopted a suite of other unconventional measures[21], such as lending cheaply to banks[22] and buying government bonds, that it believes will have much the same effects[23] as taking the cash rate negative.

Today it extended announced a decision to buy an additional A$100 billion of bonds when the current bond purchase program expires in mid April.

Lowe will explain more in a televised address to the National Press Club[24] on Wednesday.

Should things worsen here or overseas he might have to go further and overcome his reluctance to push the cash rate negative.

We don’t quite know what would happen

How a negative cash rate would play out depends on how the banks respond.

There are three possibilities.

First, the banks could adjust neither their deposit nor lending rates, meaning the negative cash rate had little effect.

Second, the banks adjust down both their deposit and loan interest rates, but this would mean charging depositors for placing funds with them, something banks haven’t done in other countries that have zero rates for fear of losing customers.

Read more: Negative interest rates could be coming. What would this mean for borrowers and savers?[25]

Third, banks could lower lending interest rates only. This might avoid unpopularity among customers but would erode interest margins. Over time banks might become less keen to lend.

It’s not clear what bank customers would do. In 2015 a survey conducted for ING Bank asked what savers would do if the deposit interest rate fell to minus 0.5%.