Very few people saw the Coalition’s win coming. If it was, as opposition leader Bill Shorten contended, “a referendum on wages” then it follows that Australians were content with sluggish wage growth and didn’t want a more substantial pay rise.

But that would be a great oversimplification. Labor had a more ambitious program of workplace reform, part of a much wider agenda for economic change and wealth redistribution, that it simply couldn’t sell to the electorate.

For two years through its “change the rules” campaign the Australian Council of Trade Unions has had remarkable success in entrenching in public consciousness the twin themes of wage theft and insecure work.

Being ‘broken’ was a broken record 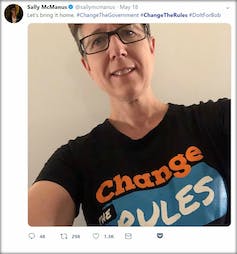 #changetherules[1] It seemed to have a deliberate strategy of repeating its talking points and examples to reinforce the view that something is “broken” and needs to change. But it provided very little detail about the type of change it wanted. Whether it should have provided more or less detail is now very much up for debate as it and the Labor Party try to work out what went wrong on Saturday. Rather than getting what they wanted, they are both on the defensive. Already business groups are weighing in, urging the Morrison government to “simplify” the industrial relations system and prevent casual workers from “double-dipping” – obtaining both a casual loading and leave entitlements. Harvey Norman executive chairman Gerry Harvey put it this way on Monday, perhaps revealing something about how he sees his workforce[2]: “The economy works best when all the little ants out there are left to get on and do great things.” Now it’s up to the Coalition The Coalition did not advocate workplace law changes in the election campaign. It gained a mandate to do no more than implement the recommendations of the Migrant Workers Taskforce[3] which it accepted back in March. As it happens, they are mostly worker-friendly measures directed at systemic underpayment and other forms of exploitation. However, given the pressure that is already coming from the business community, don’t be too surprised if the Government dusts off some of the recommendations of the Productivity Commission’s 2015 inquiry into workplace relations[4]. These include “enterprise contracts” that allow businesses to vary award terms, and a relaxation of the “better off overall test” for enterprise agreements. The Australian Building and Construction Commission and Registered Organisations Commission will remain in place as “cops on the beat” to combat union power, probably with increased resources. Unions have a choice of strategies So what room is there for unions in the new environment? In my view, plenty. The deep problems that “change the rules” and Labor’s policies sought to address haven’t gone away. We still have a culture of wage theft in many sectors of the economy. We still have a proliferation of dodgy labour hire contractors. We still have misuse of the labour hire business model at companies like Amazon, with many workers trapped in long-term casual engagement. We still have widespread use of rolling fixed-term contracts. We still have the collapse of effective collective bargaining in much of the private sector, and employer ‘work-arounds’ to avoid negotiating an enterprise agreement or get out of an existing one. We still don’t have the basis for a proper living wage. Read more: How the major parties stack up on industrial relations policy[5] As the results unfolded ACTU secretary Sally McManus has made it clear[6] that the union movement would “never give up, never stop fighting for fairness for working people”. That said, it will doubtless revisit the change the rules campaign and its accompanying communications and electoral strategies. Rather than shrinking back to a “small target”, as Labor is now contemplating in some policy areas, I think the ACTU should consider remaining bold in its vision for workplace reform. It could prepare a clearly articulated case for “changing the rules” using detailed research that precisely measures the extent of problems employers like to downplay such as insecure work and wage theft. And it should outline precisely how it wants the rules changed and what those changes would do to working lives. Read more: Why are unions so unhappy? An economic explanation of the Change the Rules campaign[7] Of course, campaigning for legal changes can only be one part of the unions’ playbook. Organising and connecting with workers on the ground in new and innovative ways is also essential, as shown by the United Voice’s new digital union [Hospo Voice] which campaigns against wage theft and sexual harassment in the hospitality industry and the Young Workers Centre[8] and Migrant Workers Centre[9] which are one-stop shops run by the Victorian Trades Hall Council. As the National Union of Workers and United Voice put it in the context of their current amalgamation proposal[10]: “we need to change the rules, but we also need to change the game”. Anthony Forsyth blogs on workplace issues at: labourlawdownunder.com.au[11]